Within China's vast agribusiness sector, no protein line underperformed to the extent poultry did and broiler meat in particular. From 5kg in 2000, most observers expected chicken meat consumption to reach 10kg by 2010 and over 15kg to 20kg by 2020. Pork which once accounted for 80% of China's meat consumption, was supposed to give a large portion of its consumption share to chicken.

Instead, deeply rooted cultural biases against poultry meat were re-enforced by a relentless succession of bird flu outbreaks, food safety scandals and post-2014 bans on imported grandparent stock of the feed efficient AA broiler species. The former deeply depressed per capita chicken consumption while the latter kept production up to 2 million tonnes below its 2012 peak of 13.86 million tonnes.

During those disappointing years, Chinese poultry's only saving grace were ducks, geese, and guinea fowl. Accounting for most of the world's output of these three species, their consumption and production kept growing even after the broiler sector became moribund in 2012. In particular, from 2000 through 2017 duck production expanded at a 2.9 % annual rate, from 1.88 million tonnes to 3.067 million tonnes.

Nevertheless, not even the continued expansion of non-broiler species could keep poultry meat output and consumption from stagnating in the six years after 2012, when chicken meat output peaked at 13.8 million tonnes. Formerly the world's second-largest broiler meat producer, China thereafter slipped to third place behind Brazil.

By 2017 per capita chicken meat consumption had fallen from its 2012 peak of 10kg to 8kg.  –Ironically, just when policymakers were at a loss about what to do, a devastating African Swine Fever epidemic promises to re-boot China's poultry sector and give it a fresh new start.

On the other hand, with pork prices up 33% over last year's level (and still rising), Chinese consumers are replacing part of their pork consumption with cheaper proteins. Through this Substitution Effect, high pork prices are pulling up the cost of alternative meats and with it, poultry markets.

Consequently, China's worsening pork shortage is profoundly boosting the production and farming returns of all poultry meats including chickens, ducks, guinea fowls, geese, and even their eggs. Even before the ASF epidemic's full severity was known, the USDA projected that China's broiler meat output would rise 8.1% this year, but three factors have forced the near doubling of this estimated increase.

First, the ASF-induced meat shortage pulled up broiler prices and profits higher and more quickly than was initially anticipated. According to Reuters, by early August, chicken breast was selling 25% more than a year ago "while duck breast has nearly trebled in price to RMB14.60/kg (US$2.04/kg)…this is still only about half the cost of pork, but such prices are unheard of in China, where breast is typically the cheapest part of the bird."

Second, while poultry farming returns are comparable to those of swine, the threat of losing entire herds to ASF makes it far less risky to raise birds than pigs. As a result, many hog farmers have opted to switch from swine rearing to poultry until the ASF crisis abates.

Amid a 50% fall in China's sow inventory, acute piglet shortages and ongoing ASF outbreaks, the USDA reports that "Swine facilities in northern China that have been impacted by ASF are switching in some cases to poultry production. These facilities have retrofitted their pens to accommodate chicken and duck production."

All this played a big role in depressing China's broiler output –until now. Last year saw China commence mass importing of AA grandparent stock from suppliers in Spain, New Zealand and Poland. That more than doubled grandparent imports from 2017's low level to 0.9 million head. This year, grandparent imports are USDA projected to total one million head, their highest volume since 2014. 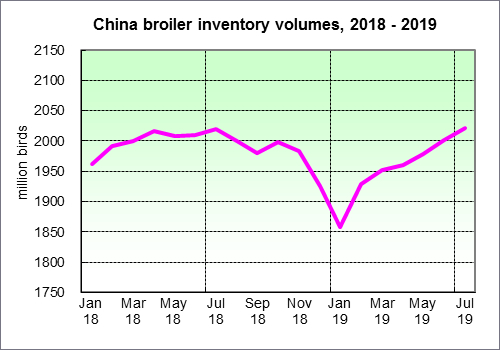 With heavier, faster-growing AA broilers being substituted in place of native birds, China's chicken meat production is surging even more aggressively than its broiler inventories –and just in time for the ASF crisis to give an unusually strong stimulus to demand growth.

All over China, there are reports of factories, schools and government offices substituting chicken, eggs and duck in place of pork in their lunchtime meals for students or employees. Hence, rising poultry meat supply is dovetailing with the first significant per capita chicken consumption increases in nearly a decade.

With both supply and demand increasing at a faster-than-expected pace, the USDA now expects China's broiler meat production to rise by 18%, from 11.7 million tonnes in 2018 to 13.8 million tonnes this year –that's just a shade below the record 13.86 million tonne output achieved in2012. It also means that China will finally overtake Brazil's 13.4 million tonne output, thereby reclaiming its former place as the world's second-largest chicken meat producer.

Growth momentum from surging broiler inventories, high consumer demand and the substitution of AA broilers in place of inefficient native breeds is expected to carry into next year: 2020 broiler meat output is anticipated to increase by another 2 million tonnes or 14.5%, to a record 15.8 million tonnes.

With many layers being culled to take advantage of high broiler prices, eggs are responding more slowly to high demand, resulting in high prices. Due to high layer rejection rates, egg production is expected to either stay constant at 2018 levels or fall back 1% to 31 million tonnes, before recovering 6.5% to 33 million tonnes in 2020.

What is the net result? From now through 2020, after factoring in a higher pork import volumes and pork sales from emergency government reserves, a 13 to 15 million drop in Chinese pork consumption will be counterbalanced mostly by a 15.9 million tonne increase in the consumption of other proteins –54% of this figure will be from poultry, 38% will be from sea food. Only 8% will be from beef or other red meats.

In 2020 China will only consume 74.3 million tonnes of meat –only higher seafood and egg consumption will keep overall protein intake from falling. Next year, however, red meat's share will drop to 68%, with pork's share of meat consumption falling to 52%, its lowest proportion since before China's economy was liberalized.

Given pork production's inability to recover before the mid-2020s, China is on the verge of a trend long seen in the west: Fast rising consumption of white meats such as poultry and seafood alongside much slower growing red meat consumption. Assumptions about rapid Chinese poultry consumption growth made in the early 2000s were delayed by the bird flu crisis, but are poised to keynote Chinese agribusiness development during the 2020s and beyond.

ABOUT US
Company Profile | Products & Services | Our Team
ENQUIRY
Contact Us | Membership Subscription
Advertise with Us | Partner with Us
GENERAL
Privacy Statement | Terms of Use
Copyright ©2023 eFeedLink. All rights reserved
Switch to Full Website