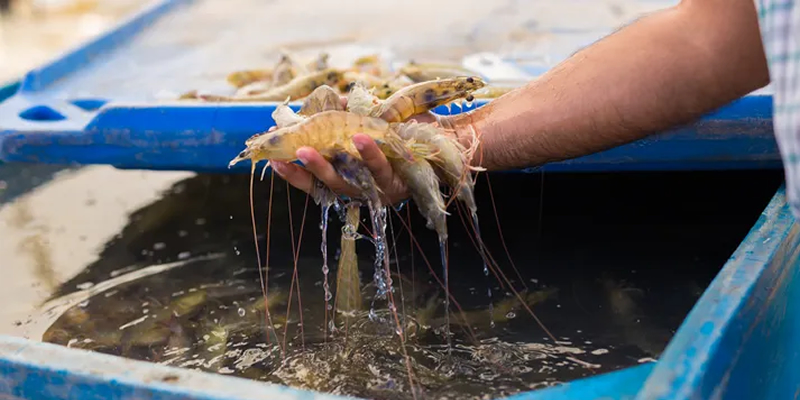 Aquaculture is one of the fastest-growing sectors globally, and India accounts for about 15% of it.

The country's aquaculture production was estimated to be around 14 million tonnes in 2021. Its vast coastline of over 7,500km and its 2.36 million hectares of ponds and tanks enable it to become the second-largest contributor to global aquaculture.

However, while India has positive growth potential, the Indian sector is fraught with challenges. In fact, the country has yet to catch up with its global counterparts in terms of quality infrastructure, technology adoption and financial inclusion.

Last February, the Indian government announced a sharp reduction of basic customs duty, from 30% to 10% on live black tiger shrimp and from 30% to 15% on both frozen krill and oil derived from certain marine algae for making aquatic feed. But more than 95% of shrimp imports are L. Vannamei shrimp; a lower import duty on this product would considerably be beneficial for the aquaculture and seafood markets.

Another sector in need of a lower import duty is India's hatchery industry, which is heavily dependent on feed for shrimp brought in from other countries. Notably, there are relatively fewer domestic shrimp feed producers.

Indian hatcheries will need incentives so that they can be better supported in importing live shrimps.

In the meantime, India's marine product exports have been growing robustly and a big part of it is due to shrimp exports. According to the latest data, the export of marine products grew 35% to $6.1 billion in April-December of 2021 compared to $4.5 billion in the same period the previous year.

In April-December of 2019, India exported $5.5 billion of marine products. The government expects exports to hit an all-time high, exceeding the $7 billion seen in FY2018, despite the impact of the pandemic.

Frozen shrimp makes up 74% of the country's marine product exports, followed by frozen fish and frozen squids. However, the share of value-added products is low at 7%. Thus, there is a huge scope to increase value-added exports and, in tandem, increase price points for fishermen. India should also focus on strengthening seed quality and availability, smart farming and food safety standards.

Black tiger shrimps were initially the core product of the Indian aquaculture industry before faster-growing vannamei was introduced.

Since India's aquaculture exports are largely dependent on a single species, diversification should help farmers mitigate any risks of a sudden price drop.

2022 is slated to be a good year for the Indian aquaculture industry.

ABOUT US
Company Profile | Products & Services | Our Team
ENQUIRY
Contact Us | Membership Subscription
Advertise with Us | Partner with Us
GENERAL
Privacy Statement | Terms of Use
Copyright ©2022 eFeedLink. All rights reserved
Switch to Full Website