Decades of ongoing steady growth in Chinese demand for beef are now intersecting with other agribusiness sector issues to profoundly reshape the quantity and quality of the beef it sources. With Chinese per capita beef consumption multiplying from 1kg in 1990 to a USDA estimated 6kg this year, China's maxed out arable land area cannot keep pace with demand growth. Imports volumes are skyrocketing and there is every reason for them to continue doing so well into the mid 2020s.

Based on USDA figures, the years from 2010 through 2018 inclusive have seen 1.4% beef annual beef output growth badly trail consumption, which increased 3.4% yearly over these same eight years. In a market of 1.4 billion people with capita red meat consumption above 45kg, beef consumption is both rising quickly and increasingly being substituted in place of pork or mutton.

While not growing at exponential rates seen in the early 2010s, 2015-18 actually saw a significant acceleration of consumption and import growth. While 2015-18 beef output increased by 3% annually, with most supplies coming from China's slow growing dairy herd, it is doubtful that production can expand by much more than 2% over the long-run. From 2015 through 2018, rising consumer incomes, pork production shortfalls and a trend to use beef as a status symbol jacked up annual consumption growth to a whopping 5.1%.

Led by an average 21.9% annual increase in official foreign beef purchases, the past three years have also seen total beef imports (legal and smuggled) increase at a 14.9% annual rate –and the trend is alive and well. 2018 saw beef imports increase 23.2% to 1.2 million tonnes and 2019 wills them rise an eFeedLink estimated 20.5%, to 1.45 million tonnes.

The ongoing African Swine Fever (ASF) outbreak is extending this rapid growth trend and helping to reshape China's beef trade flows. The epidemic is expected to create a one to two million tonne shortfall between pork supply and demand. The resulting excess of consumption over production will be filled by imported meat. Over half the additional meat imports will be red meat and over a third of those additional red meat imports will be accounted for by beef.

At the same time, Beijing's attempts to bring ASF under control also entailed establishing stricter customs inspections, which have disrupted the once predominantly illegal nature of China's beef imports. Before ASF, Hong Kong was the point of entry for smuggled western beef while Vietnam was the preferred route for Indian exporters. This is now changing.

On one hand, stricter border enforcement has made smuggling more difficult. According to Rabobank animal protein analyst Blake Holgate "Prior to ASF, unofficial bovine imports constituted a large volume of total meat imports, and, as a result of the stronger border controls, it was reported that the government arrested a number of meat smugglers in late 2018." Hence it is not surprising to hear Rabobank report that "with the slowing of the [illegal beef] trade, freezers in Hong Kong are starting to fill up."

This is particularly true of Indian beef, which was once routinely smuggled through Vietnam. The country's December beef imports from India crashed 60%, from 301,000 tonnes in 2017 to 123,000 tonnes in the same month of 2018. This however, was not due to Vietnamese market conditions; it was the result of Chinese buyers switching their beef import sourcing to legally sanctioned supplies from Brazil (31%), Uruguay (21%), Australia (17%), Argentina (17) and New Zealand (11%); with America (2%), Canada(0.8%) and Mexico(0.5%) supplying the remaining 3% of official beef imports.

On the other hand, China has signed beef trade liberalization agreements with all top exporters except the US (with whom it may soon sign one). As of late February, China had approved 234 meat processing plants or cold storage facilities for exporting beef into China from New Zealand (44), Brazil (37),Australia (34), Mongolia (34), Argentina (24), Uruguay (22), Canada (13) and Uruguay (6). An additional 14 facilities were approved for exporting beef from France, Belarus, Hungary, Serbia, Mexico, Costa Rica and Namibia, with two approved processing plants in each of these nations respectively. 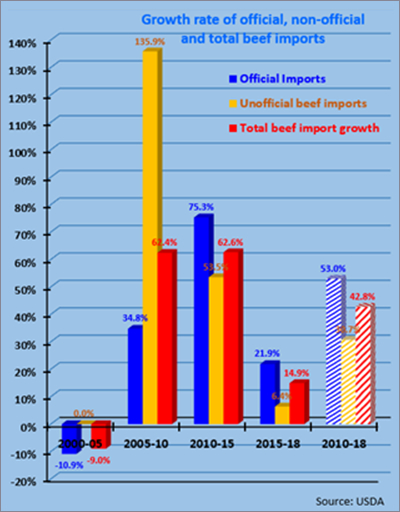 Of course, a country of China's economic weight begins aggressive import growth, it redefines the market for that product. With China's official and unofficial beef import volume rising 1,628% from 2010 through 2018, a world market milestone is being reached. Total official and smuggled beef imports exceeded those of the US in 2016. According to USDA statistics, China imported more beef than the United States for the first time in August 2018. By December 2018, China was officially importing 104,000 tonnes of beef compared to 70,000 tonnes by the US.

With the USDA projecting over 1.3 million tonnes of official beef imports and ASF likely pushing the volume closer to 1.4 million tonnes, 2019 will see China "officially" overtake America is the world's biggest beef importer. When unofficial imports are counted, the 2.1 million tonnes of beef being imported by China means it is already importing at least 55% more beef than the United States, which until recently was the world's largest buyer. By 2020, China's total beef imports will exceed the combined volume of American and Japanese purchases.

Due to China's tightening of border controls, Vietnamese purchases of Indian beef fell by over 40% in 2018, to under 600,000 tonnes –and most of this volume was now being re-exported to neighboring Southeast Asian countries, where it fetched a lower price than it did in China. Going forward, Rabobank's Q1 Beef Quarterly opines that "while some unofficial trade is believed to still exist, the current import volume likely reflects Vietnam's domestic requirements."

With 2019 Indian beef exports to Vietnam expected to bottom out around 350,000 to 400,000 tonnes, the 60% drop from 2017 levels cannot be made up by boosting shipments to other countries. Hence, by merely clamping down on its border trade with Vietnam, China induced a 12% 225,000-tonne drop in Indian beef exports along with falling Indian cattle and buffalo prices. 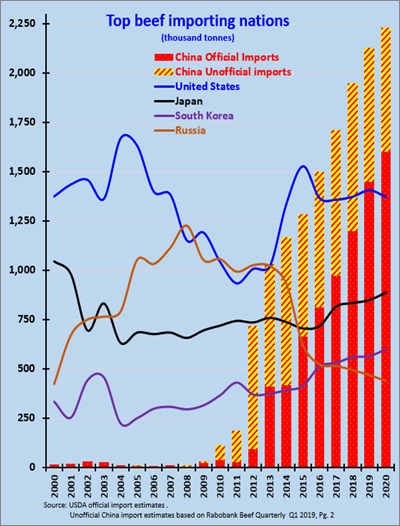 It is also not a coincidence that India was dethroned as the world's leading beef exporter by Brazil: Due to China's ongoing political friction with western countries, it sources over two-thirds of its beef imports from Latin American countries, with world leading exporter Brazil dominating. Feed rich and politically neutral on the world stage, China's preference for importing supply-elastic Latin American meats of all types is no secret.

If one counts both official imports and unofficial re-exports through Hong Kong, Brazil supplied 44% of China's beef imports totaling 525,000 tonnes, with neighboring Latin American countries such as Argentina, Uruguay and Paraguay supplying another 270,000 tonnes. Argentina, whose once great beef cattle sector was virtually moribund five years ago, has been literally brought back from the dead by Chinese export demand.

According to independent meat analyst Simon Quilty "It was once accepted that the US market set global beef prices, but strong evidence is starting to say that China is now dictating global pricing and the US is losing its mantle as the number-one driver of global beef demand and supply." With domestic production rising by less than 2% and imports by over 20%, domestic Chinese prices are stubbornly above the world average and spent most of last year increasing. Needless to say, the higher returns offered will draw in imports.

For example, just a few years ago, Australia and New Zealand typically sent 55% to 60% of their beef export volume to America, much of it accounted by ground beef. America's fast rising beef production have cut Australian imports by nearly half from 410,000 tonnes as recently as 2015 to 215,000 tonnes last year. By comparison, from 2016 through its exports to China jumped by 71%, to just under 170,000 tonnes last year. As a result, America accounts for 43% of combined Australian and New Zealand exports. China's share has risen to 27% and will exceed the US share by volume sometime in the early 2020s.

Volume-wise however, China already matters as much or more than the US to Australian and New Zealand exporters. This is because 83% of Australian beef shipped to China consists of more expensive cuts. On the other hand, with approximately 60% of US beef consumption accounted for by ground beef, 61% of Australian shipments to America consists of ground up, processed lower-value parts.

There are two implications to this: First, by drawing in top-of-the-shelf, high-value cuts, China's beef market dominance is greatest in its most value-added products. Second, how much China's new found love of beef increases your red meat expenses depends on the type of beef cut.

China will never dominate world beef exports the way it does the soybean market (where it absorbs 60%+ of exports). Instead, its impact will be more nuanced: It will boost the cost of pricier cuts more than that of commodity beef items; the cost of pork more than it does the cost of mutton or chicken.

While its price impact on world markets is only beginning, China's growing appetite for beef is already being felt in exporting nations. Alongside making world beef market fundamentals dependent on China itself, the Middle Kingdom is having definitive supply-side impacts.

In less than ten years, it has broken Australia and New Zealand's heavy dependence on the US market and given them a new outlet for exporting higher value cuts. Similarly, its willingness to willingness to liberalize its trade with South America rather than India played a role in Brazil's return as the world market's number one beef supplier.

Until ASF is brought under control, we can expect China's beef imports to grow by up to 20% annually. Thereafter, 10% annual growth looks set to continue for the remainder of the 2020s. Over that time, expect China to divert its beef import sourcing away from South Asia and Oceana, while stimulating transoceanic trade flows from South America and (if a trade deal is finalized) possibly the United States.

ABOUT US
Company Profile | Products & Services | Our Team
ENQUIRY
Contact Us | Membership Subscription
Advertise with Us | Partner with Us
GENERAL
Privacy Statement | Terms of Use
Copyright ©2022 eFeedLink. All rights reserved
Switch to Full Website