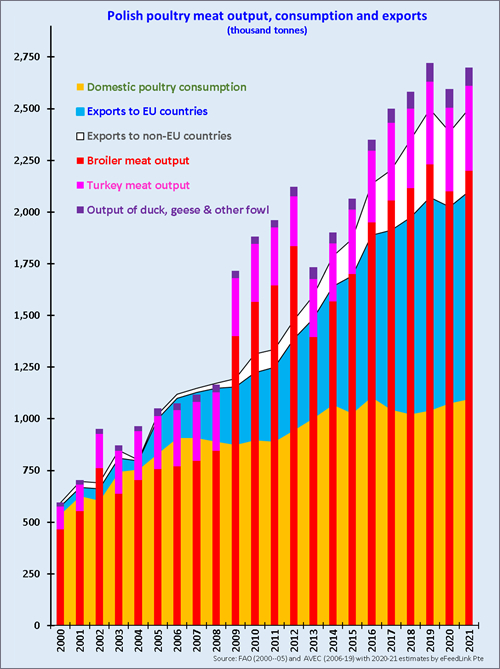 Accounting for 18% of European chicken output and 28% of EU poultry exports to other nations, Poland is Europe's largest poultry meat supplier and also its most besieged one. Simultaneously dealing with both COVID-19 and bird flu, supply and demand problems, Polish poultry's biggest long-term challenge come not from microbes but EU politicians.

Total 2020 losses from COVID-19 and earlier import bans caused by bird flu outbreaks are estimated to total PLN 675 million (US$ 173 million) and total PLN 1.5 billion (US$ 386 million). The situation was made worse when producers attempted to recover from Q1 2020 outbreaks by boosting Q2 production –just in time for its EU exports (which account for 71% of shipments) to nosedive due to the COVID-19 lockdowns. Preferring to maintain exports at all costs, producers slashed prices and their profit margins. H1 exports fell 3% by volume but 10% by value.

Q3 saw a partial recovery but a new wave of lockdowns again dented demand, followed by a supply constraining wave of new bird flu outbreaks. With a new wave of EU lockdowns coinciding with the return of avian influenza, producers have cut prices to minimize the impact on production volumes and maintain scale economies. In April when the first wave of COVID-19 lockdowns peaked, broilers sold for 13% below their April 2019 level. By December, broilers sold 35% lower than a year earlier.

In particular, the high proportion of Polish poultry exports accounted for by neighboring EU nations' hotel and restaurant chains had a devastating impact during the lockdown Q2 lockdowns. With the EU back in lockdown, the same downcycle is repeating: 15% of exports go to Germany, 8% each to Britain and the Netherlands respectively, 6% to France. 29% of exports are shipped to non-EU nations, with Ukraine (7%) and South Africa (3%) accounting for the largest share and Hong Kong, Ghana, Cuba, and China accounting for 2% to 3% each.

The situation was even worse outside the EU, where there were no trade agreements to afford protection. A wide number of non-EU nations ranging from South Africa to Ghan, China to Singapore imposed restrictions ranging from total bans to temporary suspensions of Polish poultry meat coming from bird flu-afflicted regions. While shipments to the EU temporarily recovered in mid-year, those to other nations are taking a longer time.

Unfortunately, just when Poland hoped the worst was over, late November brought news of its 33rd  H5N8 outbreak of the year but the first one since the start of Q2. Larger than most previous H5N8 outbreaks, it forced the culling  of 930,000 layers. It was followed by two more outbreaks in early December, shattering hopes bird flu had been brought under control.

Katarzyna Gawrońska, director of Poland's National Chamber of Poultry and Feed Producers states "The large distance between the first and second outbreaks of avian influenza in Poland this autumn and winter season suggests that we should expect further reports of HPAI occurrence." Noting "Some third countries have already stopped importing poultry products from Poland, and further trade restrictions should be expected", Gawrońska expects Polish broiler meat exports to be constrained by AI for yet another year.

Over the long run, the EU is a slow-growing market but EU regulations threaten its ability to penetrate non-European markets. Polish National Poultry Council director Dariusz Goszczynski worries that "Due to increasing [EU] regulatory pressure, Polish producers will not be able to compete with cheap meat from third countries, such as Brazil or Ukraine. As a result, Poland and the EU will no longer be competitive worldwide."

Sadly, Polish poultry's greatest challenge comes not from human or animal diseases, but the inability of politicians to reconcile green environmentalist ideals with the cost-centric realities of livestock farming. As the attached chart shows, Poland is Europe's lowest cost poultry producer. If European Union bureaucrats make it impossible for Polish poultry to be internationally competitive price, where does that leave other EU producers?