Wave of the future? Investment in RAS salmon farming takes off

Not even COVID-19 slowed accelerating investment in commercial RAS salmon  –but 2030 output forecasts vary by a factor of more than ten.

Besieged by high prices and supply shortages since the mid-2010s, marine-based salmon farming is boxed in by a dwindling supply of frontier growing areas and hard limits on stocking density. Although recirculating aquaculture (RAS) systems could liberate salmon from its constrained resource base, technical challenges hold back their economic viability: Is this starting to change? The risks are high, analysts are wary – but investors are enthusiastic.

Within a year, the output capacity of proposed RAS investments may exceed that of conventionally farmed salmon. But how many of these proposed investments will be profitable or even be built? Rabobank forecasts that by 2030, RAS salmon production could total anywhere from 50,000 tonnes to 500,000 tonnes. It opined that a 2030 RAS output volume of 250,000 tonnes was most likely.

On the other hand, Knut Nesse, CEO of Norway-based aquaculture infrastructure supplier AKVA forecasts RAS salmon output of 150,000 tonnes by 2025 and "one million tonnes from land-based [RAS salmon] farming in the next 10 to 15 years." For now, the market agrees with Nesse, as not even COVID-19 could break investment momentum.

In late 2019, Rabobank counted 52 projects with a collective production capacity of 722,700 tonnes. By Q4 2020, Undercurrent News reported 91 commercial salmon RAS facilities under construction, with a collective output capacity of 1.45 million tonnes – a quantity equal to 47% of this year's farmed salmon output. By 2022, annual investment in land-based RAS is projected to exceed US$2 billion. Having said that, analysts expect 70% to 90% of new investments in new industries to fail or be canceled. 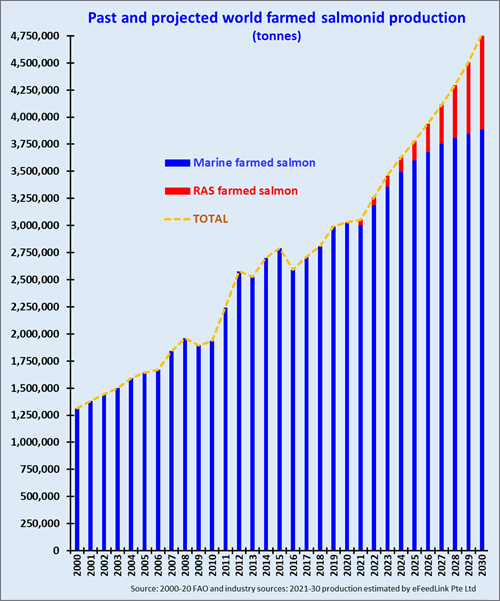 On the other hand, RAS salmon production is skyrocketing from 7,000 tonnes in 2019 to around 15,000 tonnes this year and (depending on who you believe) anywhere from 50,000 tonnes to one million tonnes by 2030. RAS salmon cultivation could grow exponentially for decades – or fizzle out– but the investors are betting that RAS cultivation will become highly profitable.

Denmark-based Atlantic Sapphire harvested the first commercially grown RAS farmed salmon this fall at its US facility, but will have plenty of competition within a year: At the low scale end, at various stages of development are six Canadian (total capacity 7,000 tonnes) facilities, three Japanese (11,500 tonnes), two Russian (2,500 tonnes), three African (25,000 tonnes) and two Middle Eastern (15,000 tonnes) RAS salmon farms with capacity ranging from 2,000 to 10,000 tonnes.

With the potential to collectively grow a whopping 483,000 tonnes of salmon annually, Norway's ambitious 20 facilities make it a leader in both RAS technology and output volume. Export-oriented Norwegian facilities have mid-scale capacities somewhere ranging from 10,000 tonnes to 50,000 tonnes.

With its Phase 1 construction completed in late 2020, it hopes to achieve a steady, stable 10,000-tonne harvest in 2021. It will subsequently undertake Phase 2 expansion next year. Thereafter comes Phase 3 and production capacity expanded to 220,000 tonnes by 2031 –the largest and most ambitious plan of any producer.

But investments rarely obey plans: Atlantic Sapphire's H1 2020 US harvest was wiped out in a 200,000 fish die-off caused by the noise and vibration-induced stress from nearby construction. In April, the company's Denmark RAS facility suffered a 227,000 fish, 900-tonne die-off when organic waste interacted with oxygenated water, boosting nitrate concentrations to toxic levels.

Technical problems threaten the business model: RAS farming requires costly filtration, waste removal equipment, oxygenation, and water temperature control; plus electricity for all the above. Because no project has yet achieved scale economies, the achievable cost floor is open to speculation.

But we believe that if costs fall below NOK45/kg RAS output could rise to a million tonnes by 2030: If cost parity with farmed salmon is achieved, RAS's infinite scalability and lower stocking densities will provide higher returns than resource-constrained, marine farmed salmon.

AKVA's Nesse believes that "if out of the first three to five movers, two or more are proven successful… you can easily see a situation where you have something like a million tonne capacity being contracted in a ten year perspective [by 2030]." Given the frantic pace of construction, investors appear confident that RAS salmon's unit costs will fall sharply, marine salmon farming costs will rise to meet those of RAS cultivation, or a combination of the two.