Weak Q4 demand, surplus of large-size fish narrows price spreads but exports, prices and revenues less disrupted by COVID-19 than those of Chile. 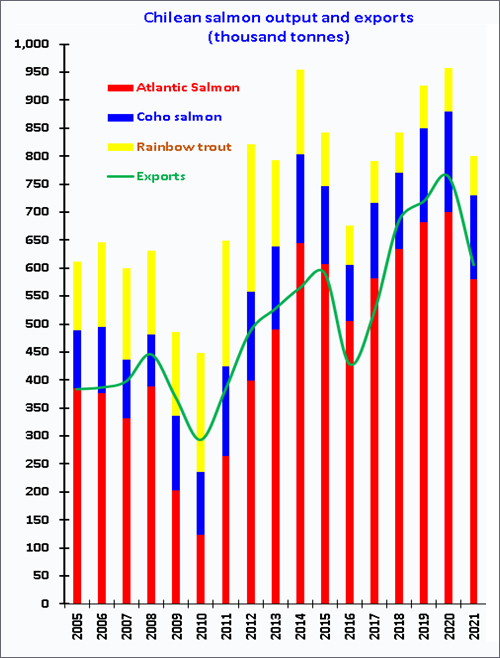 Export-oriented salmon producers are always at the mercy of their trade partners. In this year of COVID-19 lockdowns, Norwegian salmon's customers had better fortunes than Chile's trading partners. Consequently, Norwegian salmon enters 2021 in better financial shape than its Chilean competition.

With a large proportion of exports and an even larger proportion of revenues traditionally made in Q4, salmon's late-year price rally has failed to materialise, putting considerable strain on the industry's finances. This otherwise predictable revenue bonanza was jettisoned by Q4 lockdowns in European salmon importing nations. Even so, Norway survived COVID-19's lockdowns in far better condition than its Chilean rivals.

Leading producer Mowi estimates that Q3 world market salmon supply exceeded demand by 8,000 tonnes. That is usually not a problem, as unsold Q3 stocks are normally exported in the cyclically strong Q4 market.  But the Q4 COVID-19 lockdowns mean that the expected late-year pick up in prices and demand failed to materialize. Salmonbusiness.com reported one trader stating "The big Christmas rush should have been in full swing now, but they are cautious [in their buying]."

With a high quantity of maturing Q4 salmon being left unsold. Norwegian government statistics noted a large increase in November salmon biomass – a time of year when pen inventories should be falling; not rising. With fish left unsold in their pens, grow out weights increased. 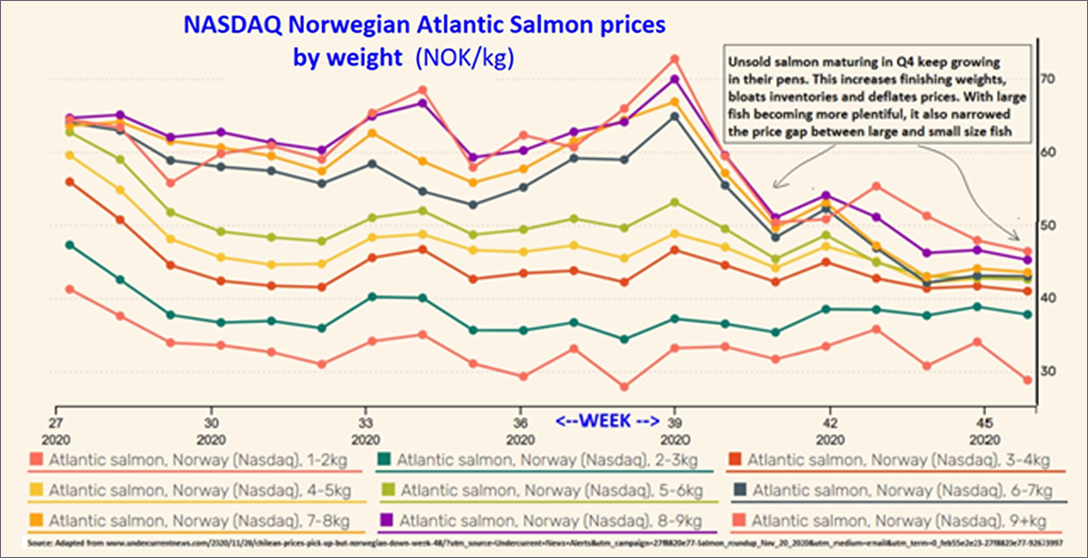 As a result, heavy fish are selling at a discount and have narrowed the price gap between various salmon sizes.  The impact can be seen in this article's accompanying graph.

While Norwegian salmon prices and margins are holding up better, their expected Q4 market upswing failed to materialize. One trader opined "Everyone knows there is a large frozen inventory in Europe. And then comes the Chilean inventory in addition to that."

And it was indeed a bad year for Chilean producers. Partly due to COVID-19 induced uncertainty, partly from intensified competition from Norwegian salmon (due to trade liberalization with China), Chile had a difficult time in China. Late Q1 and early Q2 brought news of a steep drop in exports to China.

At first, Chile successfully redirected exports destined for Brazil or Russia to Japan, where COVID-19 has had a minimal economic impact. H1 2020 exports to Japan jumped 36%, to 68,000 tonnes. Smaller but rising export quantities of exported salmon were also redirected to South Korea and Vietnam. These three nations suffered minimal COVID-19 economic damage, leaving their appetite for salmon imports unscathed.

By redirecting shipments to East Asia, Chile exported a record 63,000 tonnes in July – but it did this by selling salmon at a large discount to its Norwegian competition. H1 2020 exports were up 5.8% by volume on-year but 25% lower by value –a problem that got much worse in the latter half of the year.

Even after doing this, it could not boost exports to match supply, which was still expanding due to carry over momentum from 2019's rapid growth. Lower revenues, the cost of refrigerating unsold inventories, and COVID-19 inflated transport expenses made Chilean salmon farms suffer serious losses.

Chilean farms responded by drastically cutting back production. From 9% H1 output growth, a steep dive in pond re-stocking will limit 2020's production increase to around 3.7%, totaling 958,000 tonnes, and drastically reduce 2021 output. While this will induce a world price recovery in 2021, production cuts can do nothing about the inventory build-up currently underway.

The important neighboring Brazilian market never recovered; and this was followed by EU nations going back into lockdown. By mid-November, Mowi estimated Chilean salmon inventories in the 55,000 to 65,000-tonne range, compared to around 8,000 tonnes for Norwegian salmon. By that time, Norwegian salmon had fallen to NOK41.97/kg (US$4.65/kg) but Chilean salmon was at a discount of up to 40%, falling below US$3.00/kg (NOK27.06/kg) before recovering in recent weeks.

He predicted that "Europe will also soon get fish from Chile at the same prices." This implies Norwegian prices will fall and Chilean prices rise until their near convergence creates a market bottom – and a new price cycle.