With an original focus on the dairy food chain, and on developing bacterial cultures for milk fermentation, that remains central to the company's DNA and business, 147-year-old Chr. Hansen is today pursuing its 2025 Strategy under new CEO Mauricio Graber. "Let's grow a better world. Naturally" calls for a strong focus on the company's core business -its bacterial culture and biotech platform - with increased investments in adjacencies. Accordingly, Chr. Hansen sold off its Natural Colors Division to investment organisation EQT recently this year. And for the company's animal health and nutrition business, a major growth focus is on customer centricity, says Henrik Joerck Nielsen, senior vice president and head of Animal Health & Nutrition, in an interview with eFeedLink. 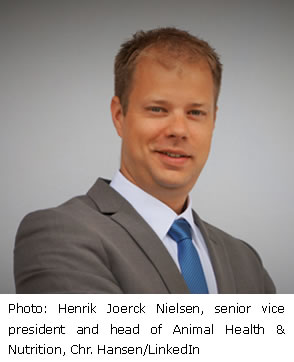 "After a successful Nature's No. 1 strategy period (from 2013 to 2020) where we  managed to build an impressive pipeline and the capabilities needed to take to market, the current strategy period, in fact already since 2019 really, is focused on strengthening the commercial infrastructure and capabilities," highlights Nielsen.

Employee-wise, the plan involves staffing up in all business regions, particularly in Asia, where Chr. Hansen's footprint is still significantly smaller than the rest of the world, according to Nielsen. In 2019, Erwan Philippe, with a decade of experience in China and Asia, and previously from Elanco, was hired as head of international sales (LATAM-EMEA-APAC). And this year, Edward Manchester, based in Singapore with 12 years of experience in Asia (previously from Biomin and Kemin), joined as head of sales - APAC.

With an expanded team, Chr. Hansen would be working closer and better with its distributors around the world, with increased local presence and technical support, and stronger regional marketing execution, says Nielsen.

Service-wise, Nielsen adds that there would be increased focus on local trials on products and data generation for customers. New local application labs would be established, such as a regional one slated to open in Singapore in early 2021. The Singapore lab would initially process feed samples from across mainland Asia (with a plan to service other large Asian countries in future), significantly shortening lead time compared to now when samples have to be sent to Europe.

In fact, Nielsen shares that expanding market reach is part of a three-pronged strategy Chr. Hansen has to grow its animal health business. A second aspect of the strategy is the expansion of its core microbial technologies through mergers and acquisitions, for example of unique bacterial strains, or strains in application areas Chr. Hansen currently does not have a presence in. The third aspect is the continued strengthening of the company's product portfolio in animal health and nutrition and the science and services around it.

Chr. Hansen continues to be a global market leader in silage inoculants and probiotics in all major species: beef and dairy cattle, swine and poultry.

Contributing its technological expertise to the animal space

"There is strong reason for Chr. Hansen to be in the animal space with the constantly increasing industry efforts to find sustainable and natural alternatives to historically used additives like antibiotics, zinc, hormones and others, which are being phased out due to a push from consumers and regulators," underscores Nielsen.

In 2020, Chr. Hansen's swine probiotic range BioPlus® celebrates 40 years on the market. According to a press release, BioPlus has been shown to promote healthy intestinal function, while keeping potentially harmful bacteria in check. In addition, they improve nutrient availability from feed by producing digestive enzymes. In short, BioPlus strengthens the sustainability profile of the swine producer.

Similarly, Chr. Hansen's poultry probiotic range GalliPro®, introduced in 2006, is the company's broadest portfolio for a single species. GalliPro's launch was timely following a European Union ban on the use of antibiotics as growth promoters in animal feed in 2006, says Nielsen. Today, GalliPro, GalliPro Tect (effective against Clostridium perfringens which causes necrotic enteritis) and GalliPro Fit are key products within the portfolio.

GalliPro Fit, first launched in the United States in 2018, is a '3-in-1' product effective against Clostridium perfringens, Salmonella and Escherichia coli, providing a better health profile for the bird, shares Nielsen. He adds that for producers who are in a situation where they have to phase out or reduce the use of antibiotics, GalliPro Fit provides a tool for them to prophylactically mitigate usage of antibiotics. Earlier this year, GalliPro Fit was made commercially available in Thailand which is also the first Southeast Asian country to do so, and most recently the European Union has approved the product's use. GalliPro Fit is also available in Mexico, some Middle Eastern countries, South Africa and Australia, and countries like Korea, Vietnam and Brazil are in the works.

Highlighting how Chr. Hansen addressing the antibiotic reduction topic from a broader industry perspective, Nielsen stresses, "We are not trying to pick a side in the antibiotics debate, but we want to play a role in offering natural solutions that can help producers struggling to live up to the demands of consumers and regulators."

Accordingly, for specific customer requests, and depending on the regulatory environment, Chr. Hansen conducts product trials to take out or reduce the use of antibiotics, and helps the customer to determine the right combination they should go for.

Developing solutions across and the value chain and looking ahead

In its 2025 Strategy, Chr. Hansen announced that it remains committed to further develop its existing Bioprotection lighthouse, among others, and is launching a new lighthouse in Fermented Plant Bases.

In the animal food space, Bioprotection involves the use of microbial technologies to extend shelf life. "As examples, for foods like sliced meat, salads and salmon, which have very short shelf lives, and are increasingly demanded in the convenience food segment, we apply our microbial cultures to compete out pathogens which would otherwise lead to food spoilage, and we are growing in that area nicely," Nielsen explains. And the implications are manifold - enhanced food safety, reduced food wastage, and a better sustainability profile for the value chain.

Commenting on Chr. Hansen's new Fermented Plant Bases lighthouse, Nielsen says that the company is leveraging its experience in fermentation technology of over a 100 years to non-animal protein sources, to find the right taste, texture, and shelf life for the evolving consumer profile.