US Poultry: Is an impending slowdown giving way to a new growth phase? 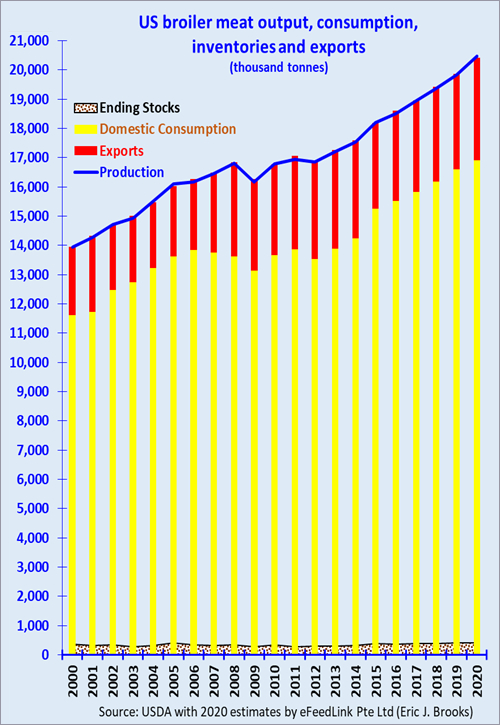 After enjoying several years of above-trend growth, deteriorating trade and consumption fundamentals are slowing down America's broiler meat sector. At a USDA estimated 2.4%, growth has been above trend since 2014, versus the ten-year 2.1% average. Even though profit margins are thinning, volume growth is continuing: 2018's 2.2% expansion to 19.36 million tonnes will be followed by a 2.4% rise to 19.82 million tonnes in 2019 -unless a wild card factor stimulates demand beyond assumed levels.

Fortunately, there are indications that an impending growth slow down may be averted, as America's broiler trade shows signs of recovering from a long period of stagnation.

Domestic demand had been compensating for five years of lackluster trade growth. 2%+  annual output growth might seem slow compared to that of emerging market competitors but in truth, America is the only wealthy country whose poultry sector has grown consistently faster than 1% annually.

The problem is that whereas before 2014 growth was export-led, the last five years have seen domestic consumption turn into the main demand driver. This is very difficult for a mature, slow-growing economy with per capita chicken consumption already near 43kg to sustain over the long term. At 2.4%, 2019's domestic consumption increase was stimulated by low domestic chicken prices, but 2020 will see it rise a slower 1.9%.

By comparison, the last five years of international trade politics have not been kind. No sooner did the industry recover from the 2014 bird flu epidemic's short-term export bans than China, closed itself to all US chicken and live poultry exports -just as it was about to turn into the world's fastest-growing market for poultry imports. 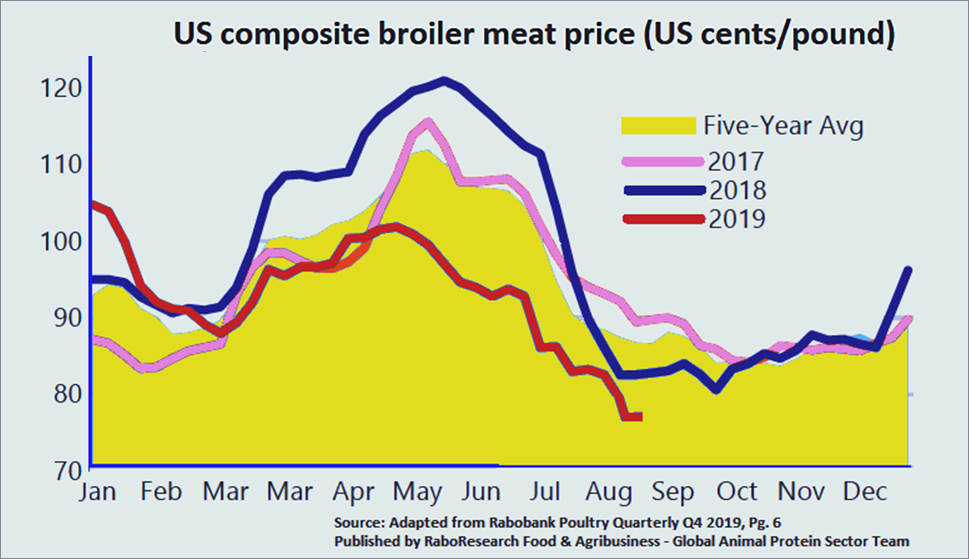 Over these same five years, exports of top supplier Brazil have increased by 7.2%, from 3.59 to 3.85 million tonnes. The collective shipments of tier 2 suppliers (Thailand, Ukraine, China, Ukraine, Poland, Turkey, Argentina) jumped 53%, from 1.95 million to 2.98 million tonnes. Fortunately, recent events imply that America's poultry sector might finally be in a good position to embark on a new spell of export-led growth.

On one hand, slack demand in the US market which prefers breast meat resulted in soft prices and an oversupply situation for the latter. On the other hand, dark meat parts that are not popular with consumers performed better than breasts. In particular, H1 2019 was keynoted by strong Mexican and Vietnamese export demand pushing up dark meat parts prices for wings and leg quarters.

H1 2019 export volumes to Mexico (+9.1%), Cuba (+3.5%) and Vietnam (+55%) enjoyed rapid growth year-on-year. Unfortunately, these were partially (but not fully) counterbalanced by declines of 10% in exports to Angola (which was 2018's second-biggest export destination), Canada and Hong Kong.

At the same time, there are four reasons to believe that America's poultry sector may exceed the USDA's relatively conservative 2020 forecasts.

First, in September 2019 America signed a new free trade agreement with Japan. According to the US Poultry and Egg Export Council "Frozen chicken, turkey, and processed egg products will receive favorable tariff reductions enabling our products to compete more effectively with the countries of [the canceled] Trans Pacific Partnership" -notably against Thailand, which has taken considerable Japanese market share from Japan in recent years. This will give US chicken a short-term boost in Japan's market while improving its long-term competitive position in the 2020s. 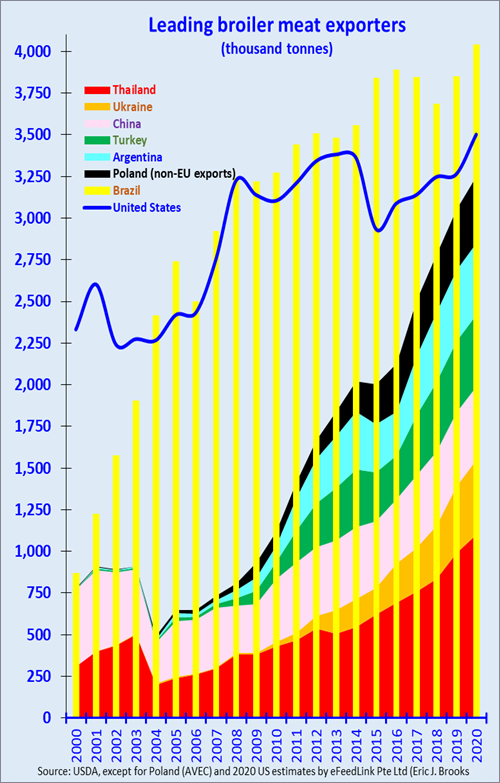 Second, less than a month later, China ended a four-year ban on exports of US chicken meat, chicken feet and poultry grandparent stock. Having exported as much as US$722 million of broiler meat and live poultry products prior to the ban, the National Chicken Council believes it can soon achieve the same revenue level in annual chicken feet sales alone, with an additional US$1.2 billion from exports of other poultry products.

Over US$1 billion of this would be accounted for by chicken leg and breast meat; with turkey meat and grandparent breeder stock accounting for the remainder. Once a net exporter of chicken meat, China's chicken meat imports have risen from 311,000 tonnes in 2017 to 625,000 tonnes this year and a USDA estimated 750,000 tonnes in 2020.

America could easily recover part of its once-dominant share of China's chicken feet market from Brazil (whose chicken feet are considered inferior) while making inroads with rapidly growing import volumes of higher-end dark meat chicken parts. Prior to the 2014 bird flu epidemic, American supplied over 90% of China's grandparent AA broiler stock. China was never able to replace the large volume of American grandparent AA broilers with those from other countries. With Beijing anxious to boost its chicken meat output by up 10% annually (in order to replace pork production lost to ASF), there is great potential for a rapid pick up in live poultry exports to China.

Third, December 2019 saw America's congress finally agree to ratify the renegotiated NAFTA (now called USMCA) trade agreement. This gives Mexico the reassurance of continuity in its trading relationship and helps boost the volume of chicken imported by US poultry's number one overseas customer. Mexico accounts for a majority of US chicken meat exports and the agreement means that the rapid export growth to this important destination can continue well into the 2020s.

Fourth, December also saw America and China jointly announce an interim trade agreement: It will see America partially roll back tariffs on US$350 billion of Chinese manufactured goods in return for China's commitment to purchase up to US$50 billion in US agricultural products. This would presumably include a significantly larger annual volume of chicken meat than the approximately 100,000 tonnes forecasted when China opened its doors to US poultry meat exports two months earlier.

While we assume the USDA's 2020 domestic chicken meat consumption estimate of 1.9% (to 16.912 million tonnes) to be realistic, its 1% export growth forecast (to 3.295 million tonnes) was made before the recent trade agreements with Mexico, Japan and China were concluded.

Based on this considerably brightened trade outlook, we assume that 2020 US chicken meat exports will exceed expectations, rising 7.3%, to a record 3.5 million tonnes. This, in turn, should stimulate broiler meat output to increase 300,000 tonnes more than forecast, by 3.3% to a new high of 20.47 million tonnes.

Over the short term, this should allow for a partial recovery in broiler meat prices and industry revenues, though it will be led by dark meat parts not popular in America's domestic market. More importantly, these recent trade-related developments put the industry on the same rapid, export-driven growth path it was on before the 2014 bird flu epidemic and subsequent trade wars derailed its momentum.