Latin America is growing faster than any region than Southeast Asia. Africa will emerge as an important, long lasting egg protein growth driver within one or two decades. 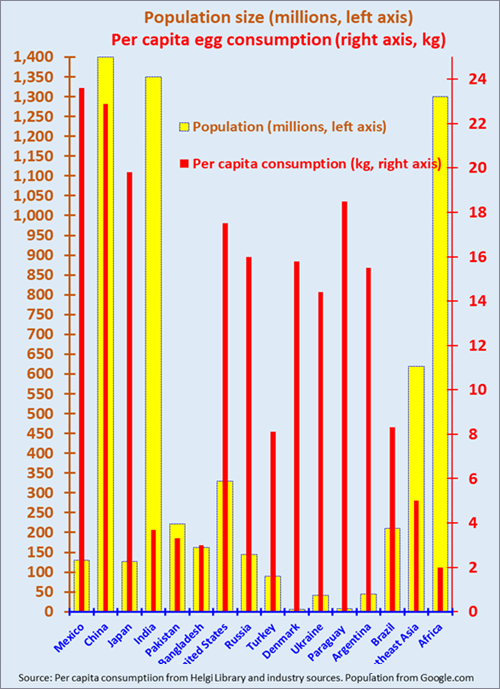 From 1998 through 2019, Latin American egg consumption has grown at a steady 3.7% rate –faster than that of any other region except South Asia. Given its plentiful feed resources and incomes below US$10,000, the nations south of America's border will continue generating  egg consumption increases that will rival those anywhere except India.

For now, Latin American egg consumption is led by Mexico (23.6kg), which has the world's highest per capita egg consumption and fourth-ranked Paraguay (18.5kg). While they have abnormally high egg consumption compared to neighboring countries, their potential for further growth is supported by rapid population growth, rising consumer incomes, and cultures that use eggs in a lot of traditional dishes.

Even so, Latin America's main growth driver is Brazil, which combines per capita income of US$8,800 with relatively low per capita egg consumption of 9kg and 3.9% annual demand growth.

While not all Latin American nations have the large populations or market size of Brazil and Mexico, some of the most rapid increases in egg output is occurring in smaller Central and South American nations.

While its 650 million people make it a small market compared to Asia's 4.4 billion people, Latin America's rapid egg consumption makes it almost as important as Southeast Asia. Within the western hemisphere, Brazil plays the same egg market driver role that Indonesia does in the Far East and India does in South Asia.

While Asia and Latin America will power egg production growth into the middle of our century, a new growth driver will emerge after 2030. African nations represent a market of 1.3 billion people with an average egg consumption of approximately 2kg across its 54 nations.

Except for the people of South Africa (8kg) and Tunisia (9kg), Morocco (6kg), and Egypt (3.7kg), 1.1 out of Africa's 1.3 have ultra-low per capita egg consumption ranging from 0.4kg to 2.5kg. Even so, feed production is now rising faster in Africa than in any other part of the world. Hence the huge potential for rapid mass-market growth

With a per capita median income below US$3,000 and per capita egg consumption far lower than any other part of the world, nations such as South Africa, Nigeria, Kenya, Tanzania and Egypt have liberalized their economies and have started experiencing rapid urbanization.

This usually results in rapid agribusiness growth within two or so decades. African incomes are low enough to allow for a half a century of rapid egg consumption growth. In most African nations, incomes must double several time before meat consumption shifts towards more expensive, non-poultry proteins.

Rich in arable land, driven by rising feed production and accelerating income growth, African nations are collectively at the same stage of economic development and food consumption that India or Vietnam were in the 1980s. Their agribusiness growth will become very important to the world economy within 20 years. Hence, Africa will become an important world layer sector's growth driver sometime after 2030.