In a world where half the people earn less than US$10,000 and eat less than 6kg of eggs annually, this food line offers the highest quality protein at the lowest unit cost. 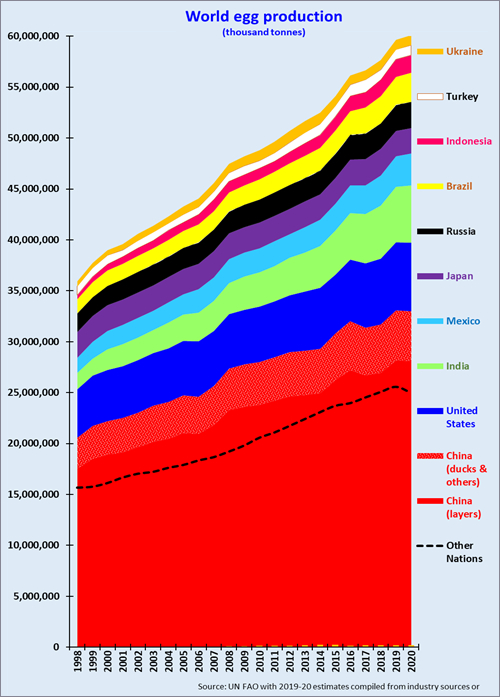 Long typecast as a dull, income inelastic protein line, eggs have a bright future in a world with a median GDP of US$18,381 and median income below US$10,000.

With over half the world's 7.8 billion people earning less than US$10,000 annually and consuming fewer than 6kg of eggs per capita, they offer these fledgling consumers the highest quality protein of any food line at the lowest unit price. Hence, it is not surprising that egg consumption and production is growing more than twice as fast as the world's population.

Based on FAO statistics, from 1998 through 2008 inclusive, world egg production (both layer and non-layer) grew at a 2.6% annual rate, while the world's population increased by 1.3% annually over this time, from 51.62 million tonnes to 66.76 million tonnes. Average world per capita egg consumption increased from 8.75kg to 9.88kg over this decade.

From 2008 through 2018 world population growth fell to 1.1% annually while egg production and consumption grew at a 2.2% rate over this time. From 68.13 million tonnes in 2009, egg output totaled 82.9 million tonnes in 2018, with per capita consumption totaling 10.92kg by the end of this period ––though with 4 billion still people consuming 6kg or less annually, even this underestimates the potential for egg market expansion.

Based on statistical data collected from industry associations, 2019 was a good year for egg producers while 2020 will see them challenged by coronavirus-induced supply-side bottlenecks and demand destruction. Last year saw steady global economic growth and high protein prices stimulate growth of 3%, to an eFeedLink estimated 85.4 million tonnes.

For 2020, the fortunes of producers vary greatly by region but on the whole, the industry is faring better than other animal protein lines. While sectors such as pork or beef are expected to see output fall, world egg production and consumption is expected to stay level in the 85 to 86 million-tonne range.

This is because even as China's African Swine Fever outbreak and coronavirus shrink world incomes and protein consumption, consumers are substituting eggs in place of red meat, which has increased sharply in price.

Layers will continue accounting for approximately 92% of eggs produced. Chinese ducks will account for most of the rest with Chinese quail and European non-layer species accounting for almost all other output. The Indian subcontinent will replace China as the pace setter for world egg market growth, with Southeast Asia and Latin America acting as equally important growth drivers from a foreign investment perspective.

With egg genetics, farm technology, and supplements mostly centered in Europe and North America, profitable relationships between western suppliers of capital and highly capitalized integrated layer firms in India, Asia, and Latin America will be the wave of the future.