Corn market uptrend aborted: The bear is back

After years of incremental progress towards a new bull market, the coronavirus outbreak perversely reversed corn market fundamentals and with it, the longterm price trend.

This is a most unfortunate year to be a feed grain farmer. It's often been said that "the cure for low prices is low prices" –but that is not the case this year. Low prices usually boost demand and reduce output to the point of triggering a price rally. Due to coronavirus's perversely uneven (and counter-intuitive) impact, low corn prices are perversely coinciding with higher production and falling consumption.

Corn recently bottomed out at US$3.14/bushel  --a level not seen since the 2008-09 financial crisis. Unfortunately, many US farmers had already invested in seed, fertilizer, and other inputs before coronavirus decimated grain markets, making for deadweight losses even if they chose not to plant corn. Moreover, with neither soybeans nor any other crops offering higher returns or lower risk, many farms had no alternative to planting corn.

Corn recently rose above US$3.20/bushel when rain slowed down the pace of planting. Even so, a worsening oversupply situation severely will keep prices to within 5% of its profit/loss breakeven point, near US$3.50/bushel.

With planted acreage rising and corn yields poised to rebound from 2019's unusually bad weather, the USDA is projecting a gigantic record harvest of 406.3 million tonnes –up a whopping 17.1% on last year's 347.05 million tonnes.

–But will demand be able to absorb this 59.3 million tonne increase over 2019's harvest size? That is implausible even by optimistic USDA projections. The situation is even worse when we look at real, ground-level market conditions.

Bizarrely, the USDA projects US feed corn consumption to rise 6.1%, from last year's 144.8 million tonnes to 153.7 million tonnes. –Normally, with corn costing 22% less than a year ago and selling at its lowest price since 2009, they would be correct to make such an assumption– but this is not a typical year.

Coronavirus-related meatpacking plant shutdowns, lockdown-induced hotel, and restaurant closures forced cash strapped livestock farmers to euthanize millions of chickens and pigs. As a result, many US agribusiness stakeholders expect feed corn demand to fall by 20% or a whopping 29 million tonnes below last year's level, to near 115 million tonnes.

To this can be added a reduction of at least 30 million tonnes in corn purchases made by ethanol making plants. Last year 137.5 million tonnes of corn were fermented into ethanol. This year ethanol production is running 35% to 40% below the 1.05 million barrels/day produced in Q2 2019. Even if output stages a partial recovery in H2 2020, the volume of corn fermented into ethanol is poised to fall by at least 25%.

With US corn output rising by 59 million tonnes and corn demand falling almost the same amount, we are looking at a profoundly deflationary rise in American corn supplies. The USDA projects US closing inventories rising from 53.3 to 84.3 million tonnes –but it does not take into account the above-mentioned observations regarding feed demand and ethanol production. Adjusting for these factors, we estimate US corn inventories rising to a record 103 million tonnes.

Outside the United States, most nations will respond to lower corn prices by growing the same or less corn than last year –but not the number two exporter Brazil. Phase 1 of the US-China trade agreement obliges China to buy much more soy from America –and a much smaller quantity of Brazilian beans.

Brazil's farmers are aware of this and can be expected to shift some soy growing acres to corn cultivation. Consequently, the USDA expects Brazil's corn harvest to rise by 6% and six million tonnes (to 106 million tonnes). This may make Brazilian corn inventories end up several million tonnes higher than the 5.9 million tonne USDA estimate, but not enough to impact world markets.

On the whole, most nations will see stagnant or lower corn production with relatively flat inventories. Only China's inventories are set to drop eight million tonnes, from a USDA estimated 208 million to 200 million tonnes –but with the US on track for a 50 million tonne inventory rise, world inventories (excluding China) will increase by far more than the USDA's current estimate of going from 106 million to 139 million tonnes. 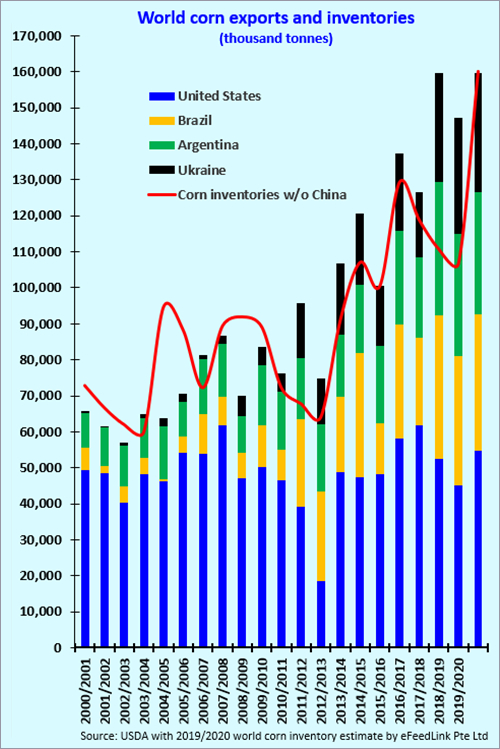 They seem more likely to finishing close to 160 million tonnes. --And this has resulted in a complete reversal of the market trend in corn supply-demand fundamentals.

On one hand, with many US and Brazilian farmers financially boxed into planting corn acres, their own internal corn demand is wilting as the coronavirus recession causes US and Brazilian meat demand to wilt. On the other hand, world corn exports are projected to be within 1% of the level of two years ago –and that assumes that the severe ongoing world recession will not make it fall further.

As things stand now, we estimate closing corn inventories outside China are poised to rise nearly 51%, from 106 million tonnes in the current marketing year to 160 million tonnes in 2020-21. From 12.5%, the world (excluding China) stocks-to-use ratio will rise to 18.2% --substantially above the 16.9% peak that occurred in the early 2000s, when corn normally traded for under US$3.00/bushel.

Interestingly, technical market signals predicted the premature termination of last year's nascent market rally.  From 2015 through late 2019, every price bottom was higher than the previous one. Last year, despite the terrible early year US growing conditions, corn formed a new price bottom lower than its previous ones.

Several months later, coronavirus started to haunt the world economy. We have no idea how the lower market bottom knew in advance that coronavirus would abort this rally. But whether we read technical trends or supply/demand fundamentals, last year's market renaissance is over. Corn's bear market is back with a vengeance.