Shrimp supply, demand and the uneven impact of COVID-19

All nations grappled with the coronavirus's impact on shrimp farming but some nations were far more affected than others. 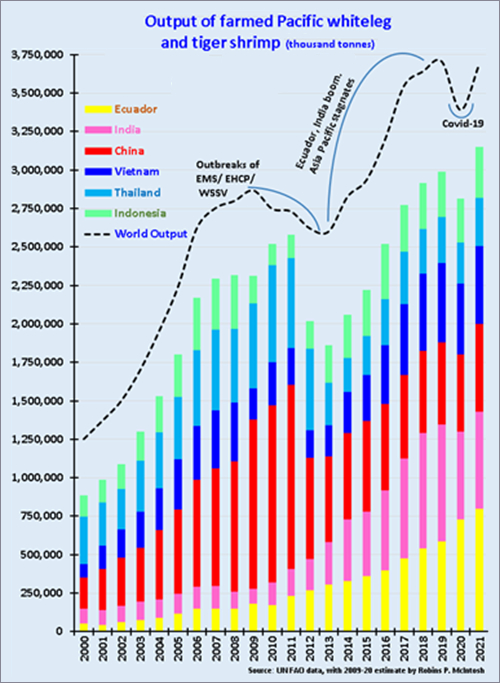 Although COVID-19 made it a difficult year for marketing shrimp, the production of some nations suffered more than others.

At a time when India, China, and Thailand are struggling to get shrimp disease outbreaks under control, COVID-19 lockdowns added insult to injury, disrupting the labor, supply chains, and transport logistics on which shrimp farming depends. This is especially true for producers whose supply chain depends on imports

With a more import-dependent shrimp larvae supply chain than any other producer, India was particularly vulnerable not just to lockdown deflation but also the disruption of international transport.

Led by India's 190,000 tonnes, 25% output fall, Asian production fell 400,000 tonnes or 15% to 2.22 million tonnes.  Whereas output declines in other Asian nations were a function of farm labor disruption and uncertain returns, India was doubly impacted by already low farming returns, escalating disease outbreaks, and the disruption of shrimp broodstock imports. From 760,000 tonnes in 2019, India only produced 570,000 tonnes of shrimp in 2020.

Pacific Rim farming losses were minimized by post-lockdown, mid-year chartered flights of shrimp broodstock to India from suppliers in Hawaii and Florida to India. The sudden resumption of broodstock imports coincided with the first of several short-lived but strong shrimp price rallies. Indian exporters were 50% behind their estimated yearly production but mid-2020's rising returns encouraged them to make up for lost output, keeping their output fall to 25%.

While Indian output fell steeply, Southeast Asia's did not. On one hand, COVID-19 disrupted Southeast Asian labor required for shrimp farming to about the same extent it did in India. On the other hand, Indonesia is self-sufficient in broodstock and Thai integrators continued supplying bordering ASEAN nations with SPF broodstock, aquafeed, and other essential inputs throughout the COVID-19 crisis.

Consequently, Southeast Asian shrimp production was not disrupted to the extent it was in India. 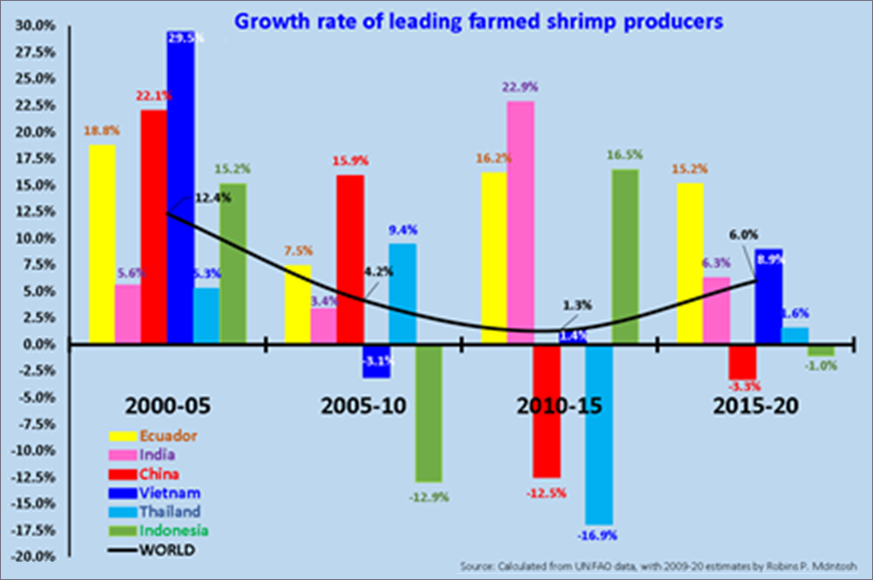 Similarly, Ecuador enjoys self-sufficiency in non-SPF broodstock created from pond specimens that are proven to be more disease resistant than their peers. Moreover, Ecuador has the triple advantage of low operating costs, a large supply of untapped frontier shrimp cultivation areas, and stocking densities that are a fraction of those found in intensive Asian operations. It was thus able to overcome COVID-19 lockdown-related labor issues and resume production even faster than Southeast Asia.

Ecuador also leveraged the recent electrification of many shrimp ponds to boost productivity. This allowed for the first time the use of mechanical aeration, pond filtering, and IT-based water monitoring and treatment. Applying technologies perfected in intensive Asian farms to its lower pond stocking densities, Ecuador defied COVID-19, ramped up output 25%, and producing a record 730,000 tonnes, taking over from India as the number one farmed shrimp supplier.

Moreover, India's woes can be seen not just in the lower quantity exported but also the quality: To get around disease woes, a significant proportion of the 2020 harvests were done prematurely. This helped minimize disease losses but at the cost of low finishing weights.

Over time, this can impact Indian shrimp's ability to penetrate fast-growing markets where large shrimp sizes are preferred. With the proportion of Ecuadorian shrimp processed head off rising, India's increasingly steep trade-off between diseases and stocking densities, finishing size versus mortality loss risk could put Indian shrimp increasingly at a disadvantage.

The attached chart shows that from 2010 through 2020 inclusive, the growth rate of most shrimp producers fell sharply – but with three exceptions: Thanks to its low stocking densities and large scope for expansion, Ecuador's annual growth rate was almost as fast in 2015-20 as it was in the previous five years.

Due both to shrimp diseases and financing problems related to its banking sector, Vietnamese shrimp's growth fell earlier and more sharply than that of any nation after 2010. With the government helping reorganize the industry, broodstock, and finances, Vietnam's post-2015 growth is the second fastest after Ecuador.

Now producing its broodstock at government-sponsored facilities, Indonesia's growth fell steeply but having reformed its management, it would have had a positive post-2015 growth rate had COVID-19 not occurred.

Ten years earlier, Ecuadorian producers went through a similar crisis and emerged with new farm management and strong, sustainable growth. In their own way, these two Southeast Asian nations are repeating Ecuador's earlier learning curve. Like Ecuador, both Vietnam and Indonesia are blessed with long coastlines and have a climate suitable for year-round shrimp.

Hence, when COVID-19 ceases to be a problem, we expect the current world shrimp market near duopoly between India and Ecuador to give away to a multipolar arrangement, as all three of these nations are capable of achieving 700,000 to one million tonnes of output by the end of the decade.