Long after the coronavirus stops impacting demand, supply-side trade-offs between stocking densities, disease outbreaks and feed inputs must be addressed.

Aquaculture's 2020 COVID-19 induced downturn hides deeper issues that have emerged in the 2010s and cast an increasingly long shadow over the industry. 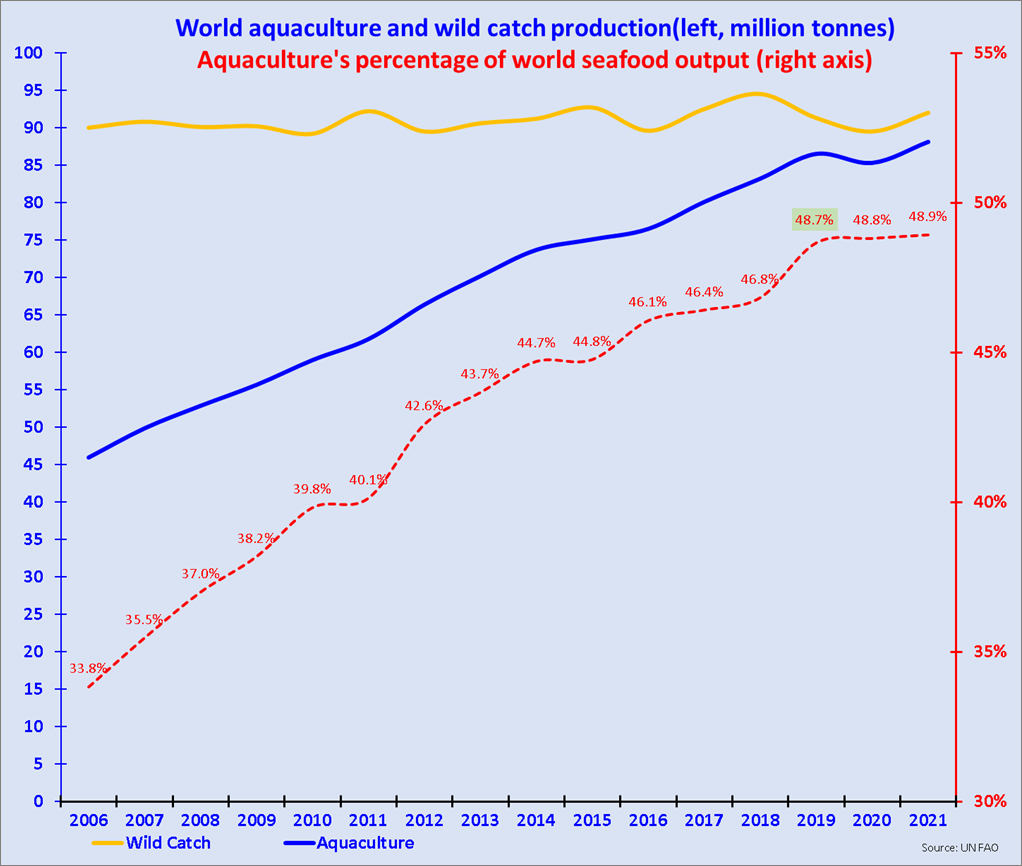 On one hand, COVID-19's impact cannot be denied: For the first time since the modern aquaculture business model was created six decades ago, farmed fish output declined. Based on preliminary FAO statistics, total seafood output fell by 1.7%, from 2019's 177.4 million tonnes to 174.8 million tonnes last year. Partly due to COVID-19 lockdown-induced fishing fleet disruptions and also due to La Nina conditions later in 2020, wild catch seafood production was down 2%, from 91.5 million tonnes in 2019 to 89.5 million tonnes last year, the lowest volume since 2012.

The bigger surprise was aquaculture, which saw its production decline 1.4% or 1.2 million tonnes., from 2019's 86.5 million tonnes to 85.3 million tonnes in 2020. From a perspective of farming returns, the most value-added species were impacted the most.

26% or 315,000 tonnes of the 1.2 million fall in aquaculture output was due to farmed shrimp. COVID-19 was particularly damaging to leading exporter India, where a long-term decline in shrimp farming returns was made worse by the interaction between COVID-19 supply chain disruptions, increasing difficulty in controlling diseases, low shrimp prices, and rising feed costs. With Ecuador's 25% increase in shrimp production unable to balance out lower Indian and Southeast Asian output, world production fell 8.5%, its biggest decline ever.

Shrimp's six-month grow-out cycle allowed producers to quickly adjust output to COVID-19's uncertain, recessionary conditions. This, however, is not the case with salmon, as their grow-out time of up to 1.25 years reflected 2019's booming demand. Even though producers slashed production from Q2 onwards, 2020 world output grew 3.7% totaling approximately 3.1 million tonnes across all cultivated salmonid species.

More dependent on the restaurant, hotel, and food service sector than Norway, Chilean salmon suffered the most: A collapse in exports to neighboring Brazil and lockdowns in America and Japan forced Chilean producers to choose between having unsustainably large inventories or selling off the surplus at a deep discount to price-conscious, non-traditional customers. As a result, Chilean salmon exports increased 7.5% or 54,352 tonnes by volume (to 779,044 tonnes) but fell a steep 14% by value.

Chilean salmon export earnings fell from US$5.146 billion in 2019 to US$4.4 billion in 2020. Almost 39% of these revenues came from the US market, where a high proportion of salmon is consumed in restaurants. The diversion and marketing of the salmon to more price-conscious consumers had a damaging impact on bottom lines: Unit revenues fell an even steeper 20.4%, from $7.10/kg in 2019 to $5.65/kg in 2020. Profitability deteriorated from H2 2020 onwards when soymeal costs rose sharply. 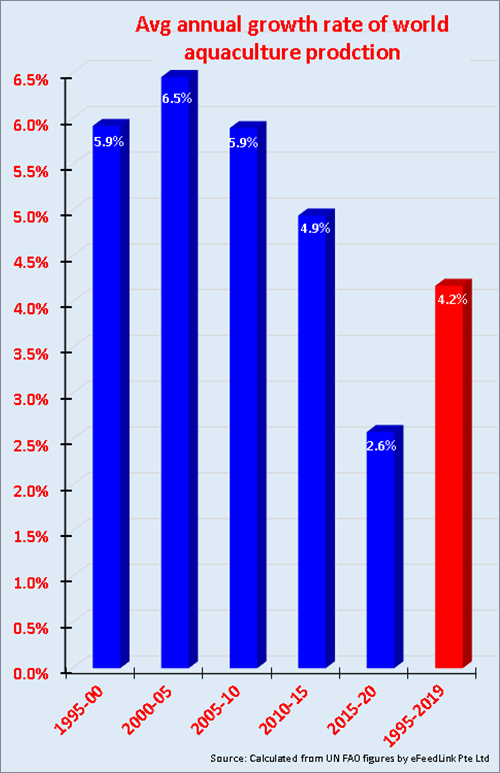 By comparison, Norway's 2020 salmon export volume increased by a much smaller 2% or 22,000 tonnes (to 1.122 million tonnes) and revenues dropped only 3% or US$271.83, from US$9.061 billion to US$8.789 billion. With a far greater proportion of European salmon cooked at home than in the United States, Norway's EU market dependence worked to its advantage. Salmon demand from Europeans working from home replaced a lot of the business lost due to locked down restaurants and hotels.

By 2021, aquaculture's most value-added species are expected to rebound in different ways. Anxious not to lose any more market share to Ecuadorian producers, Asia will power an 8.8% rise in shrimp production, almost matching i2019's 3.7 million tonnes. Chile (+6%) and Norway (+2%) will lead world salmon output growth of 3% or 3.2 million tonnes across all species.

This is mostly due to disease and stocking density issues plaguing aquaculture's two most value-added species, shrimp and salmon. After growing at 7% to 9% annually in the decades before 2010, salmon output increased a mere 1.4% annually from 2014-19 (before COVID-19 struck). Sea lice and other diseases hold output back but except for Canada (which has a hostile, over-regulated investment climate), there are few frontier areas where salmon can be cultivated.

Shrimp did better, rising 3.7% annually, but only bringing new frontier areas into production that require higher prices for their profitability. This is particularly true in leading exporter India, where disease outbreak rates keep rising amid stagnant prices, rising feed costs, and falling returns.

Over the short term, COVID-19 induced recessions will hold back aquaculture production. This is particularly true of emerging RAS systems, whose borderline profitability is susceptible to lockdown-induced price deflation. But long after human diseases stop impacting demand growth, aquaculture faces a growing array of resource constraints, supply-side issues. These include an increasingly bad trade-off between stocking density, antibiotics, and disease outbreaks made worse by a dwindling supply of new, frontier areas.

On one hand, a shortage of frontier areas, intractable fish disease issues, and flat fishmeal production cannot accommodate rising seafood demand. On the other hand, educated consumers increasingly shun farmed seafood due to the nutritional implications of antibiotics and non-traditional feed inputs. Until these issues are resolved, aquaculture may find it difficult to achieve the average 4.9% annual growth taken for granted from 1995 to 2019.