Chinese and Southeast Asian feed mills have undergone considerable consolidation and productivity increases. With COVID-19 intensifying competitive pressure, the rest of the world will follow. 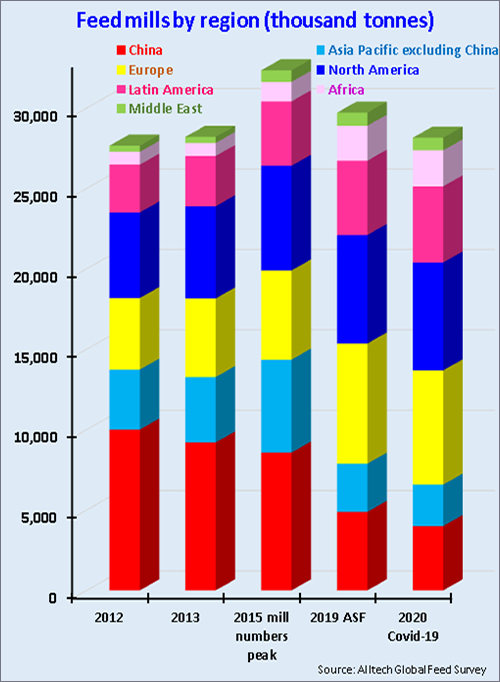 Although feed milling production has held up heroically, COVID-19 accelerated a worldwide trend towards industry consolidation, of fewer feed mills and higher output volumes per facility. From approximately 25,000 in 2010 to an Alltech Global Feed Survey estimated 27,652 in 2012, the number of feed mills rose 5% annually, peaking at 32,341 in 2015.

As was the case with feed output growth, both feed mill expansion and consolidations are creatures of geography. The global fall in feed mill numbers is mostly concentrated in China: From over 15,000 in 2000 and 10,500 in 2010, the number of feed mills has fallen to around 4,000 at the start of 2021.

China, Malaysia, Indonesia, and Thailand were the first to open commercial feed mills in the 1970s and 1980s. In these nations, three to ten older feed mills that close are replaced by one to two much larger modern mills that produce more feed than all the closed mills combined.

On the other hand, with US meat consumption still growing slowly and becoming export-driven, the total number of feed mills in North America stayed close to 6,700. Slow paced feed mill consolidation in America and Canada was counterbalanced by an expanding number of Mexican facilities.

In Latin America, the number of feed mills jumped by third, from approximately 2,500 in 2010 to an Alltech estimated 4,736 in 2020. In Africa, the number of mills tripled from around 700 in 2010 to over 2,200 in 2020. While older mills closed in Thailand and Malaysia, new state of the art facilities opened in India and less mature ASEAN economies such as Vietnam, Cambodia, and Myanmar.

Even Europe saw the number of feed mills rise by 75% from a little over 4,000 at the turn of the decade in over 7,000 in 2020, with most new facilities opening up in Russia and former Soviet bloc countries. Even so, they were outnumbered by roughly 15,000 small-scale, older generation feed mills that were closed down and replaced by far fewer, larger-scale facilities in China and wealthier Southeast Asian countries. 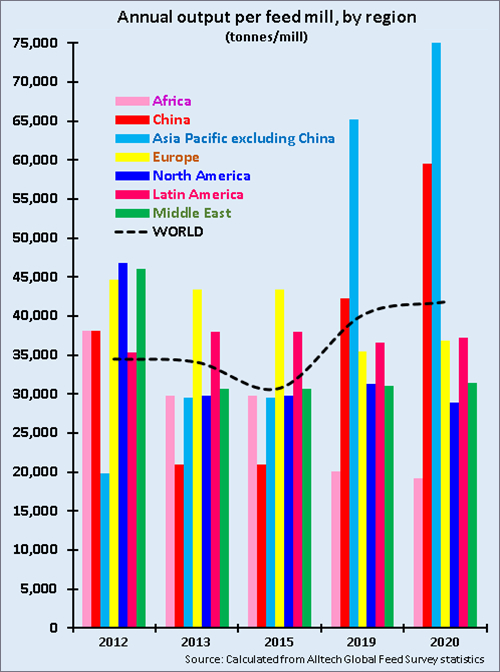 Nowhere did feed demand decelerate more than in China. A succession of hog, poultry, and shrimp diseases brought Chinese feed demand growth to a standstill from 2013 through 2015 inclusive. The opening of new, large-scale mills into a stagnant market forced the closure of thousands of old, small scale mills dating back to the 1980s and 1990s.

One immediate side-effect was a very steep increase in Asian feed mill productivity. After falling from 38,168 tonnes in 2012 to 20,989 tonnes in 2015, Chinese feed mill productivity tripled in just five years: First to 42,213 tonnes by 2019 when ASF slashed hog feed demand and forced the closure of older mills. Early 2020's COVID-19 lockdown made even more mills close even as output jumped by over 15%. As a result, average production per Chinese feed mill hit 59,500 tonnes in 2020. With at least several thousand more mills expected to close this decade, China's milling productivity has nowhere to go but up.

But the rest of the world badly lags, China and Southeast Asia's accelerated consolidation pace brought about a recovery in industry productivity: After sinking 10.5% in three years and bottoming out at 30,783 tonnes/year, average annual world feed production per mill rebounded to 41,800 tonnes/mill in 2020.

Even so, we are left with a situation where Chinese and Southeast Asian annual feed mill production is near 70,000 tonnes and the rest of the world's mills produces less than half this amount. That implies that the wave of feed mill consolidation will soon move from East Asia to mature western economies –and this process is already underway.

After years of steady growth, 2020 saw western European feed mill closures exceed the opening of new facilities in Eastern Europe. Clearly, the feed mill consolidation trend has spread from China and East Asia to Europe. With US feed making productivity even lower than that of Europe, it appears likely that North America will soon undergo a similar replacement of older mills with newer, larger operations.