3.5 million tonnes of pork looking for a new home 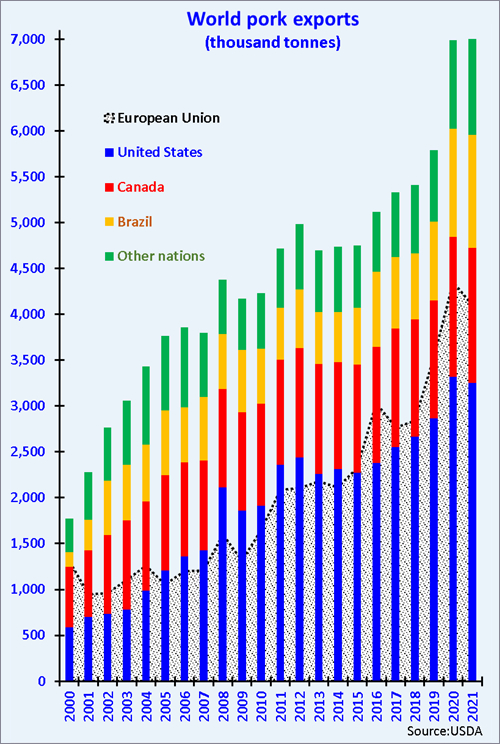 Most businesspeople would be toasting their success but western pork exporters are too afraid to celebrate their recent windfalls. Exports grew a whopping 17% yearly from 2018 through 2020 –and China is behind both their prosperity – and their greatest fears.

Interestingly, the attached graph shows that while post-2020 pork exports will be flat, the industry is now in a zero-sum-game – where sharply falling exports from the EU and smaller declines in US and Canadian shipments are offset by rising shipments from Brazil.

With much of the world economy in a depressed state and in COVID-19 lockdowns, it is highly unlikely that the collective pork imports of Japan, South Korea and other major importers can grow at anywhere near a 9% annual rate over the next five years.

In a booming world pork market, many market share losses are often offset by the market's overall growth, meaning that even less successful exporters will enjoy flat or slow growing shipment volumes. That won't be the case for the next five years: Pork supplying nations will be lucky if total 2025 exports are the same as they were in 2020 –with a very high chance that the rising production of pork exporting nations will fight fiercely to preserve their share of a shrinking market.

With much of the world in COVID-19 lockdowns, it is unlikely that rapid domestic demand growth in America, Brazil or Europe can be substituted in place of a declining export trade any time before 2023. The fast recovering Chinese swine sector's Heaven is the world pork market's Hell.