It's not just COVID-19: What is holding back the world poultry sector? 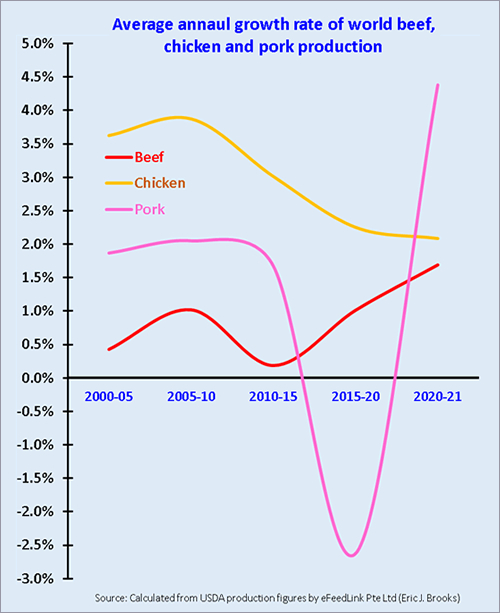 No matter how you look at the numbers, the world poultry sector is in trouble. COVID-19 is blamed for most of 2020's economic woes but this is not the case for the world poultry sector. Once the most promising livestock protein line, poultry meat production has been growing at slow, disappointing rates long before our coronavirus infected the world economy.

And then, the wheels came off: From 3.7% annual output growth in the 2000s, world broiler meat output increased by just 2.7% annually from 2010 through 2020. Do note: Chicken's consumption should be growing twice as fast as that of beef but at this time, both are growing near 2% annually.

Even before the troubles began, China's cultural bias for pork limited chicken's acceptance to free factory and school canteen meals rather than at home or among status-conscious business associates. Chinese per capita consumption peaked near 10kg in 2012.

Thereafter seven years of deadly (to humans) bird flu outbreaks and a slew of food safety scandals sunk China's per capita chicken consumption to 8.5kg by 2017. Even after rebounding back to 11kg in 2020, with ASF now under control, everyone expects the Chinese to substitute pork in place of chicken whenever possible over the next five years, keeping consumption flat. Chinese chicken consumption will continue to grow, but very slowly and only at the expense of exporters' production.

China's bird flu woes thereafter spread far and wide throughout the 2010s, holding back chicken meat production everywhere from America to France, Turkey to Iraq, Russia to India, and in a dozen other top producing nations.

Instead of rising to 13.5kg to 14.0k, world per capita broiler meat consumption rose by only 1.5kg, from 11.0 in 2010 to 12.5 in 2020. While China's avian influenza woes and low consumption created a problem, China also gave the industry much needed relief. A rapid post-COVID 19 economic recovery and high post ASF demand for chicken meat kept this year's world chicken trade from suffering a far worse recession than it otherwise would have.

Even so, the problems that made the 2010s a lost decade remain. Supply-wise, bird flu is no longer a problem in China but remains so almost everywhere else.  COVID-19 is throttling demand for China in almost every non-Asian market. The EU is not just plagued by flat meat demand but by governments who are boosting production costs to internationally uncompetitive levels.  China for now is the world's largest poultry importer but soon will cut its demand for foreign chicken by half.

In the weeks that follow, we will examine the role that China, Thailand and European producers play in world poultry's slump and salvation. One thing however, is for sure: The days world chicken producers could take rapid supply and demand growth for granted seem to be over.